At first, recently, few ingredients from ASEAN countries are used in ramen noodles. So I supposed ramen noodles can be cheaper by using ingredients from ASEAN countries. Hence, I have to know the real condition of markets, so in the beginning, I went to three supermarkets in Singapore and researched price of ramen noodles’ ingredients. Also, I interviewed some people at those supermarkets. Through these, I found that few meats from ASEAN countries were sold and a lot of Australian and American meats were sold at the supermarkets. In addition, there were a lot meats that didn’t show where they came from. Therefore, I found people in Singapore might not care where meats come form so much, like Japanese people. Next, I visited three Japanese ramen noodle restaurants and interviewed staffs at those restaurants. I asked them about where their ingredients come from, stuff’s hourly wage, promotion and so on. From this interview, I found that where ingredients come from varied, for example, Spain, Indonesia, Australia and Malaysia. Moreover, all of them said that ramen noodle price in Singapore is expensive, but it is right. In addition to that, they said that changing where ingredients come from mean that quality of food become badly.

Second, however, when visiting JETRO, I was pointed that not only material cost is cause of expensiveness of ramen noodle but also labor costs and fixed costs. About labor costs, I had considered only stuff of restaurants, but I needed to consider management costs. According to JETRO, when management stay Singapore, that costs three hundred thousand to one million. Moreover, about fixed costs, in researching in advance, I thought it is as much as that of Japan, but according to JETRO, fixed costs is three times more expensive than Japan. Hence, how to research was wrong.

Finally, through these market research and visiting JETRO, I concluded that my research question was wrong. That is because, Japanese ramen noodles’ price is so expensive, but it has already spread broadly in Singapore and ramen noodle restaurants have not tried to cut the material costs because of

those quality. However, I could not know this real state. Also, expanding ramen noodles to lower income group is future issue, so the direction of my research is right. In the future, ASEAN food’s quality become higher, and material costs can be cut, ramen noodles will be cheaper and spread more and profit will increase.

In conclusion, through my research in Singapore, I learned importance of researching in advance and field survey. Also, I need to examine whether data is true or not. Researching in advance allowed me to make use of field survey and to find more things. In addition, of course, data is important, but I should not be slanted to only data to know the real conditions. I’d like to make use of this experience for my study. 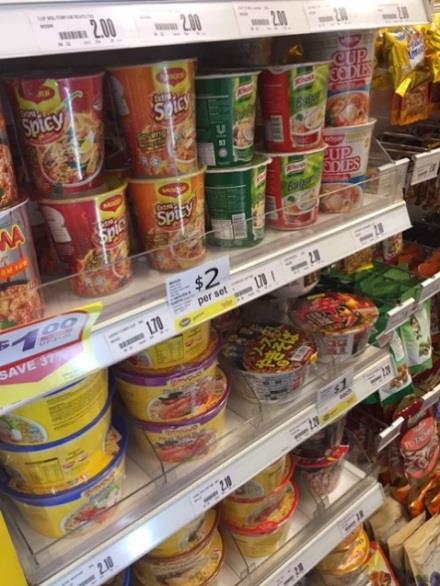